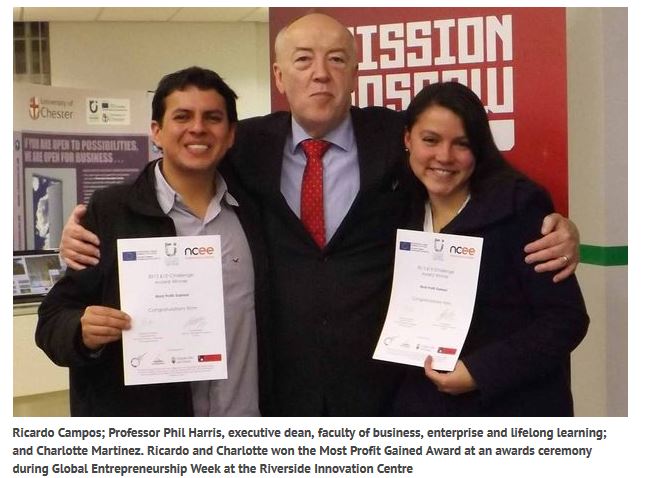 The pressure was on when students from the University of Chester pitted their commercial wits against one another in a bid to jet off to Moscow.

Against the clock, they had 48 hours to generate as much profit as possible from £10 and were recognised for their efforts as part of an awards ceremony during Global Entrepreneurship Week at the Riverside Innovation Centre (RIC).

The £10 Challenge is the first stage of Mission Moscow, an initiative that aims to nurture the next generation of entrepreneurs.

This project is being run by the University of Chester and Riverside Innovation Centre (RIC) and is part-funded by the European Regional Development Fund and Cheshire West and Chester Council.

Teams of students are in the process of meeting the exacting mission of  transforming an initial investment of £10 into the profits necessary to fund travel to the Global Entrepreneurship Congress in Moscow in March 2014 by  entrepreneurial means.

The forerunner to Mission Moscow, Destination Rio 2013, saw four teams travel to Rio de Janeiro, receiving global recognition as a ‘high impact’ event and a badge of honour from the GEW Team.

Additionally, the initiative was shortlisted for Enterprise Event of the Year by the National Association of College and University Entrepreneurs.

Competitors set to work in The Forum Shopping Centre in Chester.

Lawrence Allen, centre manager, said: “I was delighted to assist the £10 Challenge students to sell their products in a busy, real retail environment. I was also very impressed with  their combined creative and presentational skills, and wish all the students every success on the road to Moscow.”

Winners of categories such as Most Innovative Idea to Most Socially Responsible Business received a cash boost, donated by Cheshire West and Chester Council, to help them towards their goal.

Jack Bladon, also known as ‘The  Bottle Guy’, received two awards following his idea to up-cycle empty bottles into a variety of products from drinking glasses to lighting.

He said: “My business venture started through the Riverside Innovation Centre’s £10 challenge. I took part in this event because it provided a great chance to gain real trading experience and kick-start my mission to Moscow.

“Taking part in the challenge put me in contact with interesting and entrepreneurial individuals and also helped me to learn about business in the real world, all whilst making a few quid.”

Michael Williams, president of Chester Endeavour, the student-led enterprise society, added: “The £10 Challenge has been a great starting point for many students to learn important business skills on their feet. The fact that all  of the teams managed to turn a profit  from just £10 in a 48-hour time period is a huge achievement.”