Who are your voters… 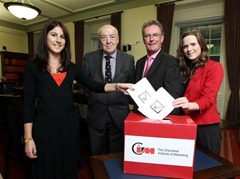 “Who are your voters now and who do you want then to be in 10 years time? – from a marketing perspective” was the critical question asked by one of the acknowledged international experts on political marketing discipline, Professor Phil Harris of the University of Chester of Northern Ireland’s politicians.  When he chaired a Chartered Institute of Marketing, Ireland sponsored panel of experts made-up of Northern Irish politicians and political parties before an audience representing the business community at the Parliament Buildings, Stormont, Belfast on Tuesday 4th of October 2011.
Politicians included, Alban Maginness, MLA for the Social Democratic Labour Party (SDLP); Simon Hamilton, MLA for the Democratic Unionist Party (DUP), Daithi McKay, MLA for Sinn Fein (SF) and Mike Nesbitt, MLA, representing the Ulster Unionists.

In addressing the question the politicians all emphasised their commitment to making Northern Irish politics work for all its citizens.  Principle, passion and support was emphasised as critical factors in politics.  One speaker explored how they were beginning to gain some tactical votes which were all important in marginal seats and allowed them to target councils and MLA seats and hold the balance in decision making.  Evidence was very apparent of the use of sophisticated database marketing techniques to target voters alongside selling policies locally, nationally and internally.  An emphasis was also put on good grassroots politics where being locally known was vital for success.

Speaking after the event Phil Harris commented that “it was remarkable how much progress there had been in establishing a more open and democratic Northern Ireland and this event was a symbol of the growing ability of the parties to work in coalition for the benefit of their community.   Electoral targeting of voters particularly the older voter and the young would play a critical role in Ulster’s politics”

Any cookies that may not be particularly necessary for the website to function and is used specifically to collect user personal data via analytics, ads, other embedded contents are termed as non-necessary cookies. It is mandatory to procure user consent prior to running these cookies on your website.