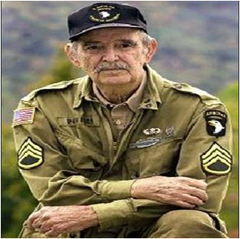 Shifty volunteered for the airborne in WWII and served with Easy Company of the 506th Parachute Infantry Regiment, part of the 101st Airborne Infantry. If you’ve seen Band of Brothers on HBO or the History Channel, you know Shifty. His character appears in all 10 Episodes, and Shifty himself is interviewed in several of them.

I met Shifty in the Philadelphia airport several years ago. I didn’t know who he was at the time. I just saw an elderly gentleman having Trouble reading his ticket. I offered to help, assured him that he was at the right gate, and noticed the “Screaming Eagle,” the symbol of The 101st Airborne, on his hat.

Making conversation, I asked him if he d been in the 101st Airborne or if his son was serving. He said quietly that he had been in the 101st. I thanked him for his service, then asked him when he served, and how many jumps he made. Quietly and humbly, he said “Well, I guess I signed up in 1941 or so, and was in until sometime in 1945 …” at which point my heart skipped.

At that point, again, very humbly, he said “I made the 5 training Jumps at Toccoa, and then jumped into Normandy.  Do you know where Normandy is?” At this point my heart stopped. I told him “Yes, I know exactly where Normandy is, and I know what D-Day was.”

At that point he said “I also made a second jump into Holland, into Arnhem .”

I was standing with a genuine war hero, and then I realized that it was June, just after the anniversary of D-Day. I asked Shifty if he was on his way back from France, and he said “Yes… And it’s real sad because, these days, so few of the guys are left, and those that are, lots of them can’t make the trip.” My heart was in my throat and I didn’t know what to say.

I helped Shifty get onto the plane and then realized he was back in Coach while I was in First Class. I sent the flight attendant back to get him and said that I wanted to switch seats. When Shifty came forward, I got up out of the seat and told him I wanted him to have it, that I’d take his in coach.

He said “No, son, you enjoy that seat. Just knowing that there are still some who remember what we did and who still care is enough to make an old man very happy.” His eyes were filling up as he said it, and mine are brimming up now as I write this.

There was no parade.

No big event in Staples Center ..

No wall to wall back to back 24×7 news coverage.

No weeping fans on television.

And that’s not right!!

Let’s give Shifty his own Memorial Service, online, in our own quiet way.

P.S. I think that it is amazing how the “media” chooses our “heroes” these days… Michael Jackson & the like!